There have been many moving speeches given over the years. I am no expert on this subject, but when I was flipping through the news archives I came across this one given by General Douglas Macarthur on April 19, 1951.  A little more than a week before, President Harry S. Truman had relieved him as commander of U.S. forces fighting in Korea. MacArthur had publicly challenged Truman’s leadership by threatening to attack China directly—a strategy that the U.S. feared would spark a wider war. MacArthur’s dismissal was not popular. Americans revered him as the mastermind of the victorious Pacific campaign in World War II. A quarter million people filled the National Mall to cheer the war hero. After summarizing his 52-year Army career he concluded his speech by recalling a line from a West Point barracks song: Old soldiers never die, they just fade away.

I will have an excerpt from this speech in this week’s podcast. I knew that I could not play the entire thing, but I want you guys to be hear it for yourself.  If you look at the problems that still plague us today from North Korea and China one is left to wonder if MacArthur was right some 65+ years ago.

If you would like to listen to the entire speech for yourself you can click below or listen to the closing five minutes in the podcast. The full speech It just over an hour in length but, it is from another time and place 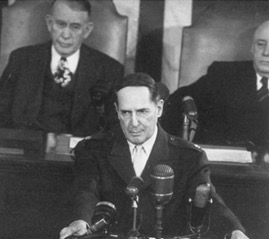 On the podcast this week we will have the ‘Old Soldiers Never Die’ speech, A western from the OTR series Gunsmoke, Three emails from you guys and of course another Five Minute Mystery. You can listen to this podcast on Thursday at Ron’s Amazing Stories, download it from iTunes, stream it on TuneIn Radio or listen to it on your radio Saturday night at 6pm Eastern time. Check your local listing or find the station closest to you at this link.