The genre of science fiction takes many forms. So many, it is difficult to lock it down to any one story type or science. One thing stands clear and that is that we humans love to think about a new possible future and science fiction allows us to do that.

What are its exact origins? Again we are dumbfounded and shake our heads. However, there are two broad camps of thought, one that identifies the early fantastical works such as the Sumerian Epic of Gilgamesh (2150–2000 BCE). While purist argues that science fiction only became possible sometime between in the late 17th and early 19th centuries. This is when man began the scientific revolution and major discoveries in astronomy, physics, and mathematics made it possible to dream. 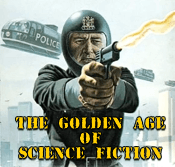 In my mind, it began with the first Golden Age of Science Fiction from 1938 to 1946. I don’t say this because it was not available. Authors like Jules Verne or HG Welles would have reason to argue. I say this because this is when the science fiction genre gained wide public attention and many classic science fiction stories were published, filmed and told. America was ready to move into space and sci-fi provided the doorway.

During World War II, American military planners studied science fiction for ideas. The British did the same, and also asked authors to submit outlandish ideas which the government leaked to the Axis as real plans. Meanwhile, the Germans had developed flying bombs known as V1s and V2s reminiscent of the “rocket ships” ever-present in pulp science fiction. A short story written Cleve Cartmill about a fictional atomic bomb project prompted the FBI to visit the offices of Astounding Science Fiction.

I hope you see my point here. We need Science fiction to fuel and inspire us to move forward as a people. My idea of a good science fiction story? It simple really. Take me somewhere that I have not been and can only dream about.

On Ron’s Amazing Stories this week you will find Science Fiction everywhere. So pack your space suit and your blaster be ready for it. You can listen to this podcast this Thursday at Ron’s Amazing Stories, download it from iTunes, stream it on TuneIn Radio or listen on your radio Friday night at 8pm Eastern time. Check your local listing or find the station closest to you at this link.