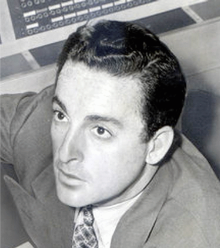 On the show last week we had an episode of The Inner Sanctum which is a radio series created by Himan Brown. Many of you asked to know more about the guy. Well, I think this is the perfect time to throw the spotlight on him and ask, “Who was Himan Brown?”

Himan Brown was an American producer of radio and television programs. Over seven decades he produced radio shows for most of the major radio networks of the time. Brown first learned about radio from his shop teacher at Brooklyn’s Boys High School, and at the age of 18, he began broadcasting on WEAF New York reading newspapers with a Yiddish dialect. One of his listeners was Gertrude Berg. She was a pioneer of classic radio and was the first women to create, produce and star in a long-running hit. She wanted Brown to play Jake, her husband on her show The Goldbergs, which he did for six months. He continued as a radio actor but soon began to pitch shows directly to advertising agencies.

Where Himan Brown shined was on the Inner Sanctum. He had a love for the dark and scary stuff and it showed on this well produced and written anthology series. Big stars flocked to his show to be part of its masterful direction and productions. Inner Sanctum eventually came to television and he repeated his success there. In 1974 he showed the world that good radio was still possible with the hit series CBS Radio Mystery Theater starring E.G. Marshall. This series ran until 1982 and reruns on radio stations all over the world today.

In 1938, Brown moved to a ten-room apartment at 285 Central Park West, where he would live the rest of his life. He had two children, Barry Kenneth Brown and Hilda Joan Brown, two grandchildren, and four great-grandchildren. Brown died peacefully at his apartment on June 4, 2010, at the of 100.

Brown’s awards include – The American Broadcast Pioneer and Peabody Awards. Also, Brown was inducted in the 1990s into the National Radio Hall of Fame.

This Week’s Podcast: On the podcast this week we have a scary story from listener Alexandra which should have you shivering just a bit. Mark Nelson is back reading a Japanese Horror short story that is remarkably entertaining! You can listen to this podcast on Thursday at Ron’s Amazing Stories, download it from iTunes, stream it on Stitcher Radio or on the mobile version of Spotify. Do you prefer the radio? We are heard every Sunday Night at 8:00 PM (PST) on AMFM247.COM. Check your local listing or find the station closest to you at this link.

Helpful Links:
Podcast Survey – Help the podcast by taking this survey.
Story Submissions – Use this link to submit your stories to the show.
Podcast Archives – Looking for the first 100 episodes of the podcast?