On Ron’s Amazing Stories – The Blog, we talk the Horror Express and Dolls. It is quite something to say that because dolls are not a subject that I am well versed in. However, if you combine the Horror Express and dolls… well, then you have be referring to the haunted variety.  So I am proud to say, “On the podcast this week Jason and I will present episode fifteen of the Horror Express. Our Topic for this time is Haunted Dolls.”

A doll or stuffed animal, that is claimed to be cursed or possessed in some way, is a Haunted Doll. The earliest report of a this goes back to Ancient Egypt where the enemies of Ramses III attempted to use wax images of his likeness to bring about his death. The dolls used in this ritual were said to be living and would curse anyone who bore their resemblance. The ancient Egypt Poppet, effigy and voodoo dolls are examples because of their long history of being used to place curses on people and, of course, their association with the occult. 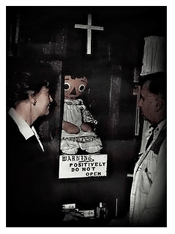 Although haunted dolls or cursed objects in general have a long history, it is only within the last few hundred years that people have started cataloging specific haunted dolls. One of the most famous is Annabelle. She is a Raggedy Ann doll alleged to be haunted. The doll resides in a glass box at The Warren’s Occult Museum in Monroe, Connecticut. The doll’s story served as the inspiration for the films The Conjuring (2013), Annabelle (2014),Conjuring 2(2016), and the upcoming, Annabelle 2 (2017). Haunted dolls are even listed for sale on sites like Craigslist and eBay. Also, people have started making YouTube channels showing off their haunted dolls.

Whether you believe in this phenomenon or not the subject has a collected some impressive tales. Jason and tackle some of these stories and share them with you this week.

As mentioned above the Horror Express returns with haunted dolls and an OTR story that just might be the scariest yet! You can listen to this podcast this Thursday at The Horror Express, download it from iTunes, stream it on TuneIn Radio or listen on your radio Saturday night at 6pm Eastern time. Check your local listing or find the station closest to you at this link.