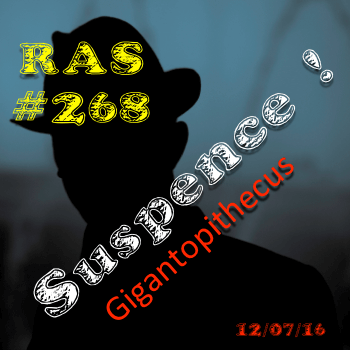 On this episode of Ron’s Amazing Stories titled, Gigantopithecus, a UFO crashes in a family’s backyard. The story is expertly narrated by John Dehner.  Also, we tell the true story of a camping trip gone very wrong, and we have another five minute mystery. So, press that play button!

What is it? It is a very large fossil Asian ape of the late Miocene to early Pleistocene epochs. That is a fancy way of saying that it is probably extinct. We say that because many believe that this ancient fellow just might be the modern day bigfoot.

Our OTR Story – Heavens To Betsy

This week’s story comes from Suspense, and it could have made today. It tells the tale of an everyday suburban family who discovers a crashed UFO in their backyard. It is titled, HEAVENS TO BETSY and originally aired: October 11, 1955.